Weather means more when you have a garden.  There’s nothing like listening to a shower and thinking how it is soaking in around your green beans.  ~Marcelene Cox

All the gardens are finally in as of last week. This year everything seemed to take longer, but according to my diary and last year’s calendar, we’re right on schedule. We may not have an early set of anything, but things are in the ground. Part of what slowed us down, aside from the new addition of our son, was the new addition of chickens. Last year the ladies spent much of their time in chicken tractors, but now they’re completely free-range during the day, which means all five gardens needed to be fenced in. 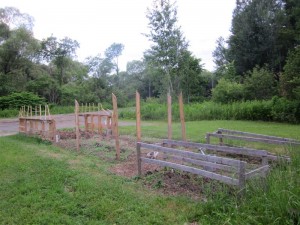 The North garden is a bit of a hodge-podge when it comes to fencing material. On the far side from the camera, where the potatoes are planted, we used two half pallets for moving large yard equipment. It looked much more pleasing before I had to add the top pieces and twine to keep the chickens from hoping in. Where the large beams are live our lettuce, celery, bush peas, and broccoli. Closest to the camera are the tomato racks with a bed of spinach between them. Everything is surrounded by chicken wire.

We were very careful in how we set up beds this year and made sure to ensure that we would have walking aisles so that we could actually week them all efficiently and hopefully avoid some of the pitfalls from last year. 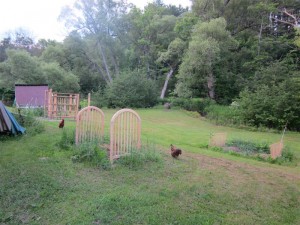 The four south gardens all ended up with different fencing that gave them each a unique look and feel. 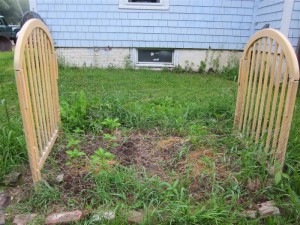 The hot pepper bed, sporting cayenne and Anaheim this year, is fenced in by two pieces of crib and chicken wire. (The crib was something given to us by a friend of ours before my parents bought us a sold side one for Vaughn. Right now drop sides can no longer be sold in our state, so we weren’t even able to thrift store this one. So we decided to reuse it in a very creative fashion.) 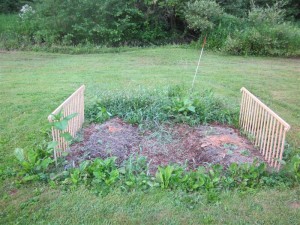 The cucumber bed, using the other two pieces from the crib, looks very sparse right now. Last year we planted dill in with the cucumbers, but I had no time to harvest it. If things go well with the bed this year we’ll try dill again in 2013. 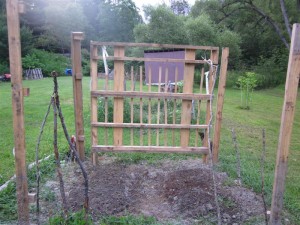 While this was the last bed to be planted, and it’s only been three days since this picture, there’s a lot of green there now! The pole beans (Kentucky Wonders I saved seeds from two years ago) and the pumpkins (some sort of pie pumpkin I bought at the farmer’s market and saved seeds from) are growing like mad.  for this bed you can see that we used another large pallet for the east facing wall and used strapping to make a lattice out of it. the beans on that side will love having that amazing structure to grow on! The branches in front only go to where we planted the beans. On the sides we’ll be stringing up twine for the beans to climb on. All in all, it will look really cool when all 42 (Yes, I said 42 – 42 our of 46 planted beans are growing!) are turning this garden into a living shed. 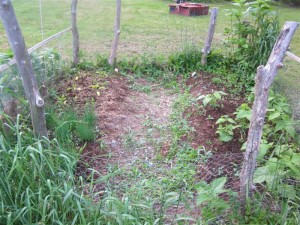 This is what I’ve been calling the Hodge-Podge garden as it have a little of everything growing in it. Chives, onions, green peppers, carrots, and bush beans are all thriving right now. This bed, as you can kind of see in the far side of the picture, is fenced in using the branches that we dropped into the ground three years ago when we first created this bed. We chicken wired it in to keep the three ladies out.

On the left, you can see some plants growing on the outside of the bed, they’re the same ones that are in the far back right hand corner over-shadowing and providing protection for the carrots. Those are sunchokes. They’re a native sunflower to north America with edible roots that can be used like potatoes but supposedly have a different flavor. There were tons of tubers from them in the soil we got from Joe’s parents. Normally we pick them out and throw them away as they do have a tendency to take over everything. After some careful reading, and thinking hard about foraging and the like, I decided to take a chance and actually let some grow this year. The only ones allowed in the garden are the ones over shadowing the carrots, all the ones on the outside are tubers I unceremoniously dumped while weeding. We’ll see what we get!

7 responses to “Another Garden Update”