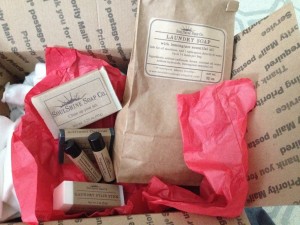 Over the past few years we have worked towards removing chemicals from our daily lives, specifically when it comes to what we put on our bodies through soaps, laundry detergents, and the like. We stopped using dryer sheets close to a decade ago, which was easy as they don’t really do anything at all aside from coat you clothes in petroleum based chemicals. The next step was to swap to a fragrance and color free detergent. Check. Then we moved to a natural based detergent. What could be even better than fragrance, color, and chemical free detergent?

How about if is was local?
As in, the same state you live in local?

I came across the perfect detergent: SoulShine Soap Company. Started as a side business on a small farm in Maine, SoulShine Soap has a wonderful selection of products. One of the newest items that they have is their powdered laundry detergent. For $18.00 you receive a bag of delicious smelling dry laundry soap in your pick of lavender, lemongrass, or orange scent. (I went with lemongrass – it smells like lemon candy. I’m in love with it!) This bag will fill up quart canning jar, plus some. As for the claim that the bag holds over 70 loads, I can attest to that! It’s been over a month since we bought our batch of detergent, we’ve run close to forty loads, and we’re only a fourth of the way through the bag! Regular laundry, dog-smell embedded sheets, cloth diapers…you name it, this stuff works on it! I have been truly amazed by how mild, yet powerful, this laundry soap is.

I’m glad to say that isn’t the only thing that we bought in our order from SoulShine. I picked up a stain stick (which even works on toddler induced blueberry stains), two different soaps, and some of their lip balm. Aside from the great quality of the products, I was also excited to find a handwritten thank you note from ordering from them, and the entire package was cushioned with cloth scraps, a fantastic idea that I might have stolen for packing some holiday gifts.

I can’t say enough about this company! They have made a customer for life here in Norridgewock. 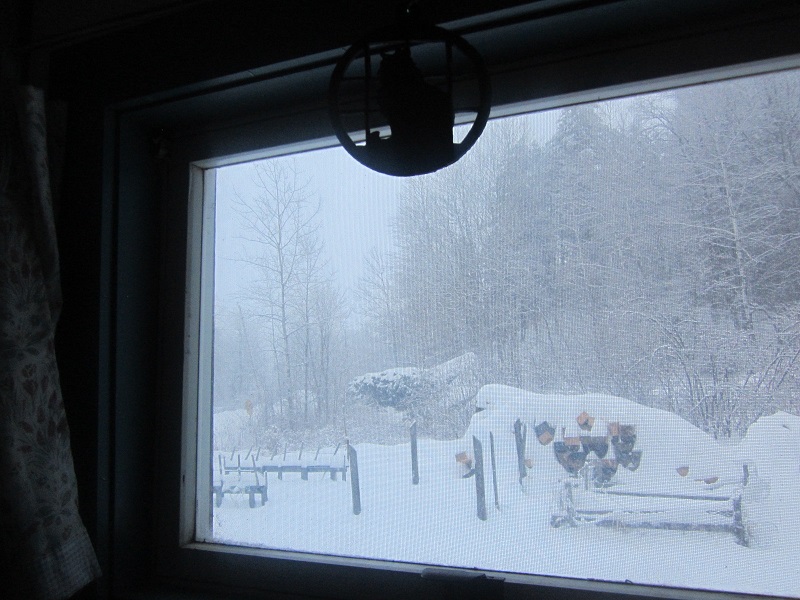 So, what to do with a toddler on a very cold (18F) snow day? Well, we read, played blocks, had a picnic in the living room, colored, did laundry together, and pretty much everything else we could think of. Little Mister’s favorite activity? Playing in the snow in front of the woodstove. We did this last year, too. It’s starting to become tradition. 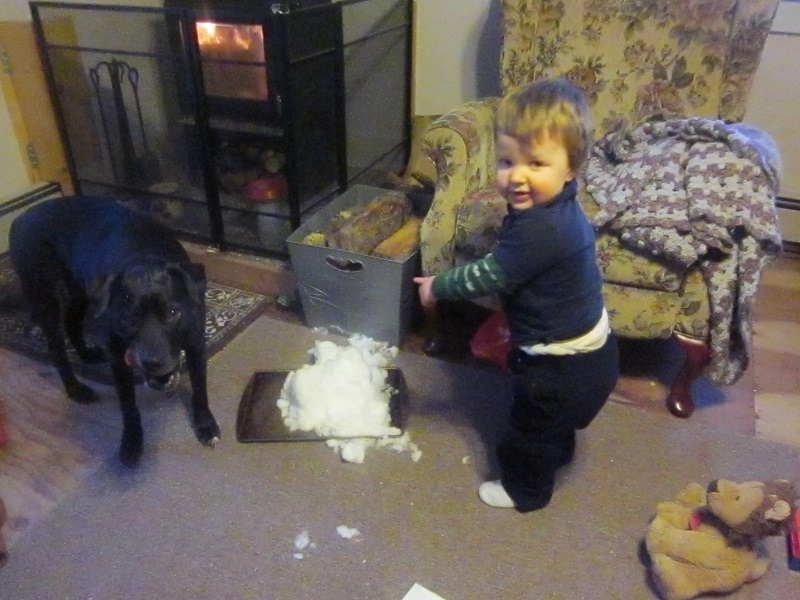 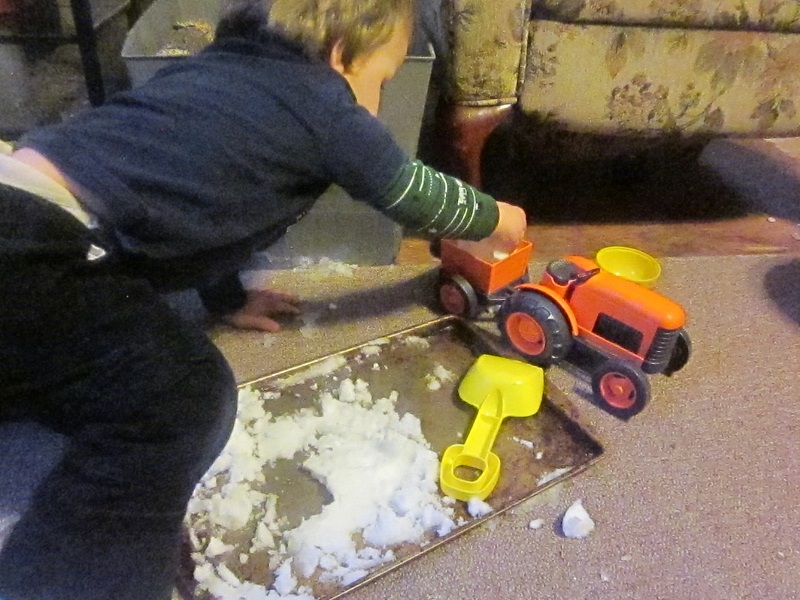 (I apologize for the graininess of the photos. I can only get shots of this kid with the camera on the quickest setting. Not to mention the light from the stove and the overhead were throwing it for a loop…)

I can’t even begin to tell you how excited we are as a family to hear about the BPA ( Bisphenol A) ban in baby food becoming one step closer to reality in Maine. This would make Maine the third state to rid themselves of this harmful chemical.

Is BPA really dangerous? Well, some say yes and some say no. I say that any man-made chemical that we don’t understand fully shouldn’t be used in mass amounts in our food sources. Given that the National Institute of Environmental Health Sciences has found some issues with BPA, that should help move a few people in the direction of at least thinking about the possible dangers of BPA.

Wait, you say, they only mark SOME concern at most, so I shouldn’t have to worry about it.

Here’s what I pose to you as a thought to think on: Theses tests were done on lab rats. While they are a common test subject for many reasons, they are still not human beings. Testing a chemical on a completely different species only gives us an inkling of an idea of the possible side effects. For the chemical BPA the side effects seen have been:

Obviously this one chemical isn’t the sole cause of theses issues, but as it can be a contributing factor, do we really want to see what this can do to us as a species in the long term? Do we want to see these chemicals entering our children’s bodies? Or to be more selfish, our own?

After the story started breaking throughout the news world, the American Chemistry Council’s Polycarbonate/BPA Global Group released the following statement:

The consensus of government agencies across the world, including the experts at FDA, is that based on the science, BPA is safe for use in food-contact materials. As recently as September, Health Canada reviewed the science on BPA and stated that based on the overall weight of evidence: ‘that current dietary exposure to BPA through food packaging uses is not expected to pose a health risk to the general population, including newborns and young children.’

It is important to allow the federal government’s regulatory authorities to make science-based decisions and not to create patchwork state restrictions when it comes to consumer products. BPA is one of the most thoroughly tested chemicals used today and has a safety track record of 50 years.

Dare I mention DDT, Silent Spring, and the countless years that people were told that the toxic chemical was safe for them?

But the FDA says it’s safe. The FDA even banned BPA from sippy cups and bottles.  So, if it’s harmful enough not to be in bottles and sippy cups, why are we still allowing the FDA to claim that we should be able to consume products that have been carried in BPA plastics and BPA coated cans?!

Canada has even gone so far as to ban BPA.

Europe started the process back in 2010:

In an open letter to the European Food Safety Authority (EFSA), a group of 60 scientists and health campaigners from 15 countries said they feared exposure to the chemical Bisphenol-A (BPA) could damage health, particularly among vulnerable groups such as babies and pregnant women.

I think that, given the unknown effects of BPA in teh long term, there’s really no room for discussion as to whether or not this toxic chemical that other nations have already seen fit to do away with should be tossed like an old hat in the States as well. We, as parents, need to make sure our voices are heard on this. With current politics only looking at finances and gun control, we need to be the keepers of our food supply and make sure what we are feeding our families is safe – Safe for us, future generations, and the environment.

In looking for toys for Vaughn, we’ve been striving to collect only those that are BPA free. We understand that not everyone who gives him things for his birthday, Christmas/Yule, or in general will take the time or see the importance of BPA free toys, which makes it that much more important that we as parents do everything we can.

On a whim, while out and about in town about three months or so ago, we checked out Reny’s to see if there was anything that we were interested in grabbing for him as an early gift and something that we could bring to New York on our trip. We lucked out – and were surprised – to find a BPA free dump truck!

This is is rugged! Vaughn’s been beating the snot out of it already and absolutely loves the thing.