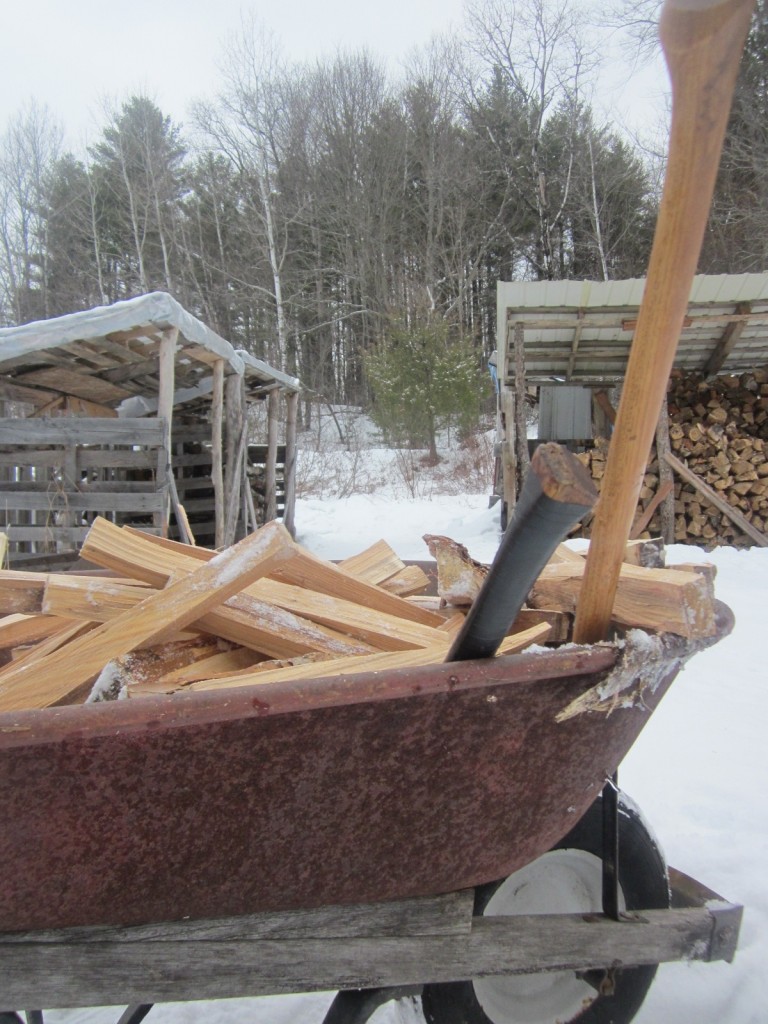 The past few days have given us a well needed break from the sub 30F temperatures that gobble up the wood, but today is the last of that. Tomorrow the temps dip back down below 20F during the day and below zero at night. While the last stretch wasn’t too horrible to endure, thanks to the backup heat of an oil furnace and an abundance of maple and birch for a wood source, I’m a bit concerned this next one might be a tad more difficult. We’re now into a cord of willow. Many people refuse to burn willow. It burns hot and fast. It means more reloads and less of a chance that there will be coals in the morning. Given that it was split in early December – after being cut for the appropriate amount of time – and that it was from a tree larger than 24″ at breast height, some of the wood is fighting to dry out still. That means stacking it in the house before using it.

Prepping for this next snap also meant busting out more kindling as we’ve used up much of what I prepped in the fall. While Little Mister played in his room, I was able to move to the front wood bin the wood for the next day or so and work out a wheelbarrow full of kindling. Even though it will be cold out tomorrow, here’s hoping I get the chance to get another load in.

Winter is on the horizon.

Posted on September 5, 2012 by Tasha Raymond | Leave a comment 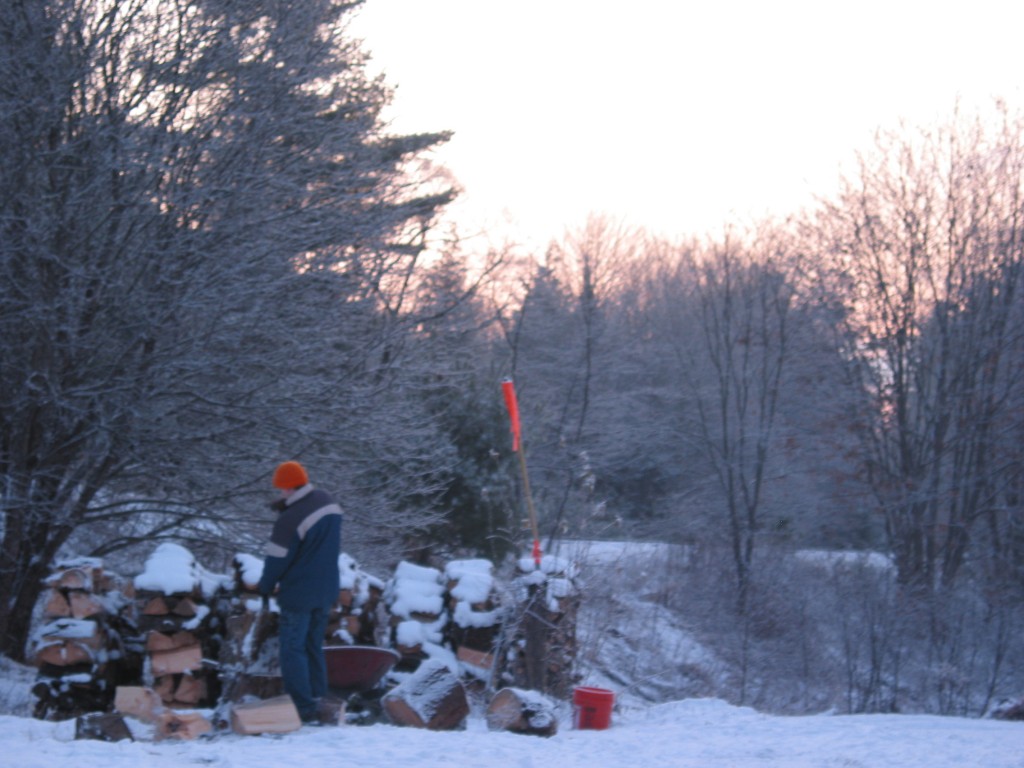 Today has brought the first cold, shiver-inducing rain of fall. While we’re looking at 80F for the next few days, mixed with humidity, there is no doubt that fall, and thus winter, is right on the horizon. After spending just ten minutes stacking wood, I was soaked to the bone and had to make the conscious decision that it was too wet to trust swinging an axe. Even though we’re behind on wood right now, I have no doubt we’ll get caught up before snow flies.

(I’ll be honest and admit that part of the issue is me not being able to wrap my head around us having to treat homesteading as a job. It’s hard to let the husband go off to cut wood when I haven’t seen him all day. I’m trying to forcibly adjust to that.)

Needless to say, we’ve come a long way from the above photo, taken in 2009. We’re no longer hesitant on whether something will burn. We know how to spot dry, dead-standing wood, and realize the need to use as much as possible from each and every tree that’s cut. While our jobs have changed since Vaughn was born, and I no longer get to help spot and load, I’ve become adept at emptying the truck and banging out two to three days worth of split wood in a twenty minute period. Joe has become more confident with felling and cutting to the point that, if he wanted to, I’m sure he could do a basic Wood Harvesting 101 lecture.

Aside from getting the wood in, food storage is coming along. It’s going slow, but getting there. Some items in the garden have been planted that we’ll try to winter over with a thick blanket of hay. Others still need to be planted. We have plenty of jam, some vegetables frozen, and are working on getting pickles put up. We’ve diversified greatly since last year. Here’s hoping we’ve done better with our estimates on what we’ll need to last through the winter now that there’s three of us.

There may be chores that need finishing and events that need to come to pass before we’re fully ready for the winter, yet that doesn’t set us to worrying. There have been times where we’ve bit out nails not knowing if we’ll be ready, but what’s the use in wasting time fretting? There’s stuff that needs doing. 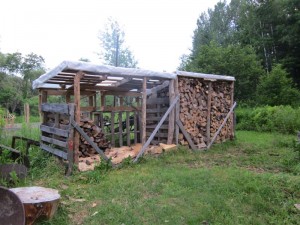 Well, the gas to get the pallets and the screws might have added some cost, but the concept’s there. By scrounging at a local business, Joe was able to get the okay to take as many pallets as we want, when we want. This has worked out great! Not only were we able to use them for help fence in the gardens, but Joe’s been putting his creative New Media skills to work are created these wood sheds that each hold roughly a cord. Each shed takes eight regular size pallets and some scraps to tie it all together. While right now the roofing is plastic sheeting that we mis-bought this winter, the long term goal will be to get metal on them that will by far outlive the sheds themselves and will be used on the next generation.

We’ll need six of them on the property, but we definitely have the room, so it won’t be a problem. We’re also planning on building a mini one out front, maybe half the size, that we’ll keep stocked up during the winter and that will give us a couple weeks worth of wood at the ready during the cold spells. Hurray for better planning than last season!

Before anyone begins reading this assuming that it is an blog post focusing on the gay marriage issue in Maine, let me state that it’s nothing of the sort. (For one, that’s nothing that concerns how we run the homesteading portion of our lives, but it’s also something Joe and I agree on and are both in favor for.)

This post deals with the issue of two very like minded people who are married to one another having a difference in opinion about an environment impacting decision that will be made in our town. Currently there is a plan in the works to see a natural gas pipeline go from Kittery up through the Kennebec Valley and eventually up into Canada. This pipeline would be directly effecting towns like Augusta, Farmingdale, Fairfield, Oakland, Norridgewock, Madison, and Skowhegan.

While both we are both environmentally conscious people, we each have very different views on the pipeline. To help others see how different these views really are, we’ve decided to share them.

Tasha: I’m not happy about the gas line coming through because, instead of wasting more money by creating temporary relief to the fuel issue, that money should be used to looking at sustainable, long term fuel solutions and subsidies for those that are already using/converting to long term solutions, such as algae based bio-fuel, wood, and solar. Tax credits for curbing fuel usage would also be a bonus as well, as it would hopefully teach more people to look at their own consumption and not simply keep swapping from one form of another.

My other concerns include the environmental impact that the construction of the line will have along the Kennebec River and how the pipeline will effect the river at the crossing points. None of this information has been readily made to the public as far as the environmental impact is concerned. It’s unfortunate that so many of those for this massive project are only thinking of the monetary aspect and not the damage that might be incurred on the Kennebec Valley.  What about when this gas line is no longer usable? What good does all that damage do for the next generations? I’m not asking these questions in order to get an answer, per say, but asking them to get others thinking about the “what ifs.”

Joe: I’m always happy to see cleaner fuel methods moving forward and becoming available to the public.  It’s true that Natural Gas is not a permanent solution, but it IS much cleaner than fuel oil which many in the Northeast burn as their primary source of heat.  It is also more abundant in North America than oil, reducing our foreign oil needs as well as putting money into our local economies.  Natural Gas is also less expensive than current alternative heating options, excluding cord wood of course.

We all know we need to shift from our current fuel usages.  I think that this process is best to be done in baby steps gradually moving towards more sustainable practices.  Currently we are no where near close to using sustainable and safe energy sources as our primary fuels, so we need to use the best we have.  If we always use the best we have, and are always striving towards the “next generation” fuel source, we will eventually get there and we will keep our planet as clean as possible.  If we try to make the jump to fully sustainable practices too quickly, only the rich will be able to afford to do it and the mass populace won’t catch on – in fact, it could attach a stigma to the technology keeping it from ever catching on fully.  We want to make sure solar, geothermal, heat pumps, hydrogen cars, ethanol (algae and cellulose based) are ready for the big time before they are pushed as “the way to go.”  In the mean time, Natural Gas is a great stop gap – and it’s cheap to boot.  I don’t want to see us continue on with our wasteful ways simply hoping that eventually we’ll have the perfect solution when it may never come.  At a minimum it may come at a much later time and meanwhile we are destroying the world around us.  So, just like everything else, we should do the best with what we have.

As you can see, while we have two very different views on the current situation, our long-term view is the same. That being said, this shouldn’t be romanticized in any fashion. Our ability to discuss these differences is something that has taken these past eight years to build to, and as with everything, will never reach perfection. How do we do this? Simple enough: we agree to disagree, which is easy when the overall outcome that both people want to see happen is the same. Right now this is severely easy to do in the case of natural gas because it’s not something that effects our home right now and most likely won’t even be made available to us because of where we live in town. If it was to effect us directly, we would be looking at hours of research and soul searching on both our parts regarding the topic, along with some very lengthy conversations about whether or not we would utilize the product available.

Let there be fire!

I’m not going to make this a long, lengthy post as I think Joe would be the best one to handle explaining all the background and particulars of our long journey to wood burning, but we’ve done it!

We’ve been using the stove for over a month and love it. We do still have oil backup since Teeny (lovebird) can’t get below 62F for long at all, but it’s barely been running.