Posted on February 4, 2011 by Tasha Raymond | Leave a comment

Growing up, my folks had a matching set of dishes. If I remember right, they were Correlle, but I can’t remember for the life of me the pattern that they were. I remember that they were beige with what I think was a wheat stalk. There were large plates, soup bowls, and small plates.

Ever since I was little, I’ve wanted a matching set. I could care less if they glasses matched, the coffee cups were the same, or even if the silverware was exactly alike, but the plates and bowls needed to match. When we first moved in together, we bought a boxed set of Correlle from Wal-Mart. I literally took half an hour to decide what we were going to get. (Joe had made the mistake of saying it didn’t matter to him.) I went with the Callaway pattern. The box came with four dinner plates, four dessert plates, four cereal bowls, and four glasses. Everything but the glasses held up to Correlle’s usual standards. We only have one of the glasses left now, but I don’t mind mismatched glasses. Over the next few years we picked up four more dinner plates, four more bowls, the 12 1/4″ serving platter, and a 9 x 12 baking dish (no longer made).

It seemed as though, once we moved into Norridgewock, the only place that carried Correlle (Wal-Mart) had stopped stocking the Callaway pattern. We kept saying that at some point we would save the money to finish our set, or as much as we could, but never had the chance. For the holiday season this past December, Joe’s parents gave us a little money that we specifically ear-tagged to go towards dishes. 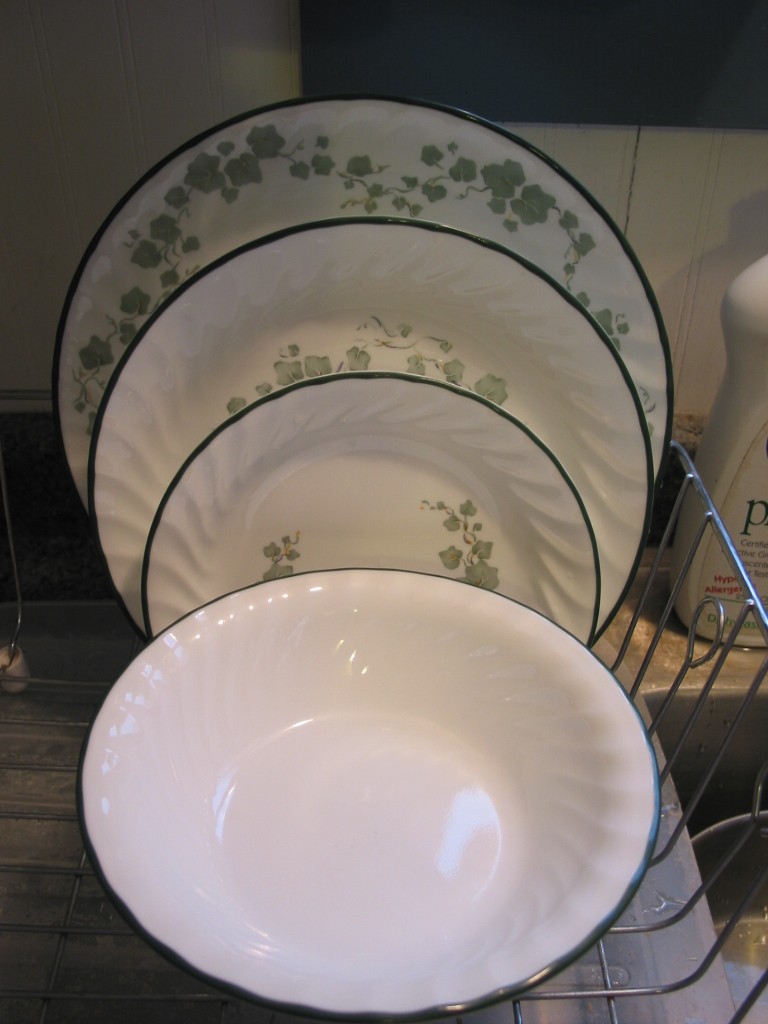 We now have eight cereal bowls, eight dessert plates, eight lunch plates, and eight dinner plates. More than enough for our eventual family! We had debated with going to ten to get a “full” set, but we do dishes often enough throughout the day that, even if we had a family of five, it wouldn’t be an issue.

This entry was posted in House and tagged Callaway, Correlle, dishes, food. Bookmark the permalink.