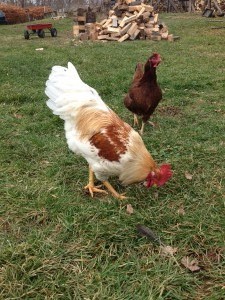 This past season Hubster and I decided that if either of the two roosters we’ve raised decided to start acting overly testosterone driven that they would go to freezer camp before having the chance to attack us.

Well, it looks like we’ll be down to one rooster soon. Amp, as gorgeous as he is and as great of a job as he does, he’s starting in with some nasty habits: chasing girls that won’t let him mount them, forcing some girls away from the feed, following us and grumbling when we let them out, and placing himself between us and the girls. His stink-eye and habits just won’t do.

Now, there will be those reading this that will ask, “Why don’t you just rehome him?” Roosters are not known to be broken of Nast habits once they manifest. Come spring, Amps attitude will be much worse as she hits a natural testosterone high. Rehoming him would only make him someone else’s problem. As far as homesteading is concerned, butchering Amp makes more sense as he isn’t a problem for someone else and we recoupe part of the cost of raising him through providing food for our family. He’s an 8.5lb bird that, if he dresses out to 5lbs, will give us about six meals.

As sad as it will to see him go, it’s necessary. Amp is frightening the girls to the point that we’re losing more eggs than what we should be this time of year. He’s keeping some of the girls from the food to the point that a couple of them are growing very lean. Amp is handsome, but looks don’t make up for being an asshole. Since the butcher isn’t doing up another batch of birds until January, he has until then, unless things get really iffy, at which point we’ll do him in ourselves.