And then there were seven… 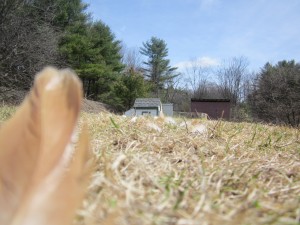 Now that our chatter box is gone, the coop’s more silent than normal.

About a week ago now we lost another hen to the fox. I was out at the post office and came back to Louise, one of our oldest pet birds, gone. All that was left behind was a pile of tail and wing feathers. I’m assuming she put up one hell of a fight. Skee – another of our original three – had lost a pigeon’s worth of feathers as well.

When I found Short Beak, our only roo, he was pretty beaten up. There was blood dripping off his wattles and he was missing most of his beard. His saddle feathers were a little thinner, too. He was having a hard time standing on his own. We ended up having to pull him into the rehab clinic (read: dog kennel in basement) so that he could regain his strength. He hasn’t crowed since, though. We don’t know if we’ll keep him or not if he keeps being so quiet.

He really scared us when he didn’t eat, though. He seemed severely depressed on his own. Once we put him back in the coop, he perked up a bit though. Here’s hoping he starts yakking. 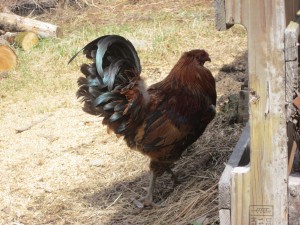 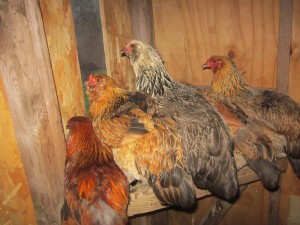 What’s left of the Aracuanas. 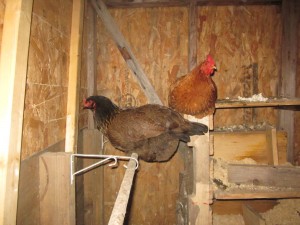 Edith and Skee are missing Louise. Neither of them have been super perky.

This entry was posted in Animals and tagged attack, chickens, fox, Louise. Bookmark the permalink.

One response to “And then there were seven…”