Before I get around to doing a general update on what’s been happening around our little patch of land, I wanted to share the new family favorite when it comes to hot dogs. In lieu of trying to make our own buns or eating them with bread, which is sacrilegious in the way of hotdogs, if you ask me, we’ve come to making homemade pigs-in-a-blanket. 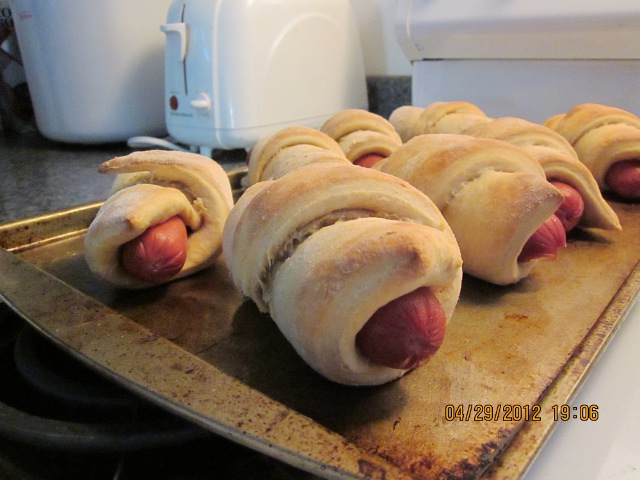 I can’t recall where or when I came across the recipe, but what we used for the blankets I titled “Super Quick Wheat Buns.”

Begin by combining the water, yeast, oil, and sweetener, letting that rest for 15 minutes. After adding in the additional ingredients, roll out and cut into triangles. Wrap a triangle around each hotdog, using a little egg wash or water to help seal the dough down. Bake these off at 400F for 8 to 10 minutes on a greased cooking sheet. We’ve also made hamburger buns with this recipe as well. It’s very universal.

In other news, we’re almost there on the gardens. We’ve been slowly fencing them all in, recycling some old cribs and pallets for some of the fencing and using basic chicken wire in other areas. It’s a bit of a hodge-podge, but each garden will have it’s own style and look to it.  Our chickens like to follow me wherever I am, and unfortunately this also means into the gardens for weeding. Some plants have already been started, and others transplanted. Onions, chives, green peppers, carrots, and bush beans have all found their way into the soil. Here’s hoping that cucumbers, tomatoes, spinach, lettuce, pole beans, bush peas, pumpkins, and potatoes will be soon after.

There’s a lot to go, still, and we’re hoping to chip away at it this week and have everything done this weekend.  I’m hoping in the new future to get a chance to update the garden page and add some photos of our garden beds as well. Hopefully that will become more of a living record of how things progress through the season.

Joe has been doing a lot of work on the front and back stairs that we’re hoping to post pictures of eventually. The back stairs needed a lot of shoring up, especially since there were no braces underneath. The front stairs, while intact, we really wanted to add a larger top landing to for safety’s sake. We were able to recycle free pallets for the wood in both projects, and once their painted, they will both look great!

Speaking of painting, we’ve been spending the last four weekends working on patching up the paint on our house to appease the powers that be. Joe’s folks have been kind enough to help us out with that. It will be grand when everything’s done and over, though, as it’s really cutting into the time that we’ve been able to spend on the gardens and putting up next year’s wood supply. With the upcoming long weekend, we’re hoping to play catch-up.