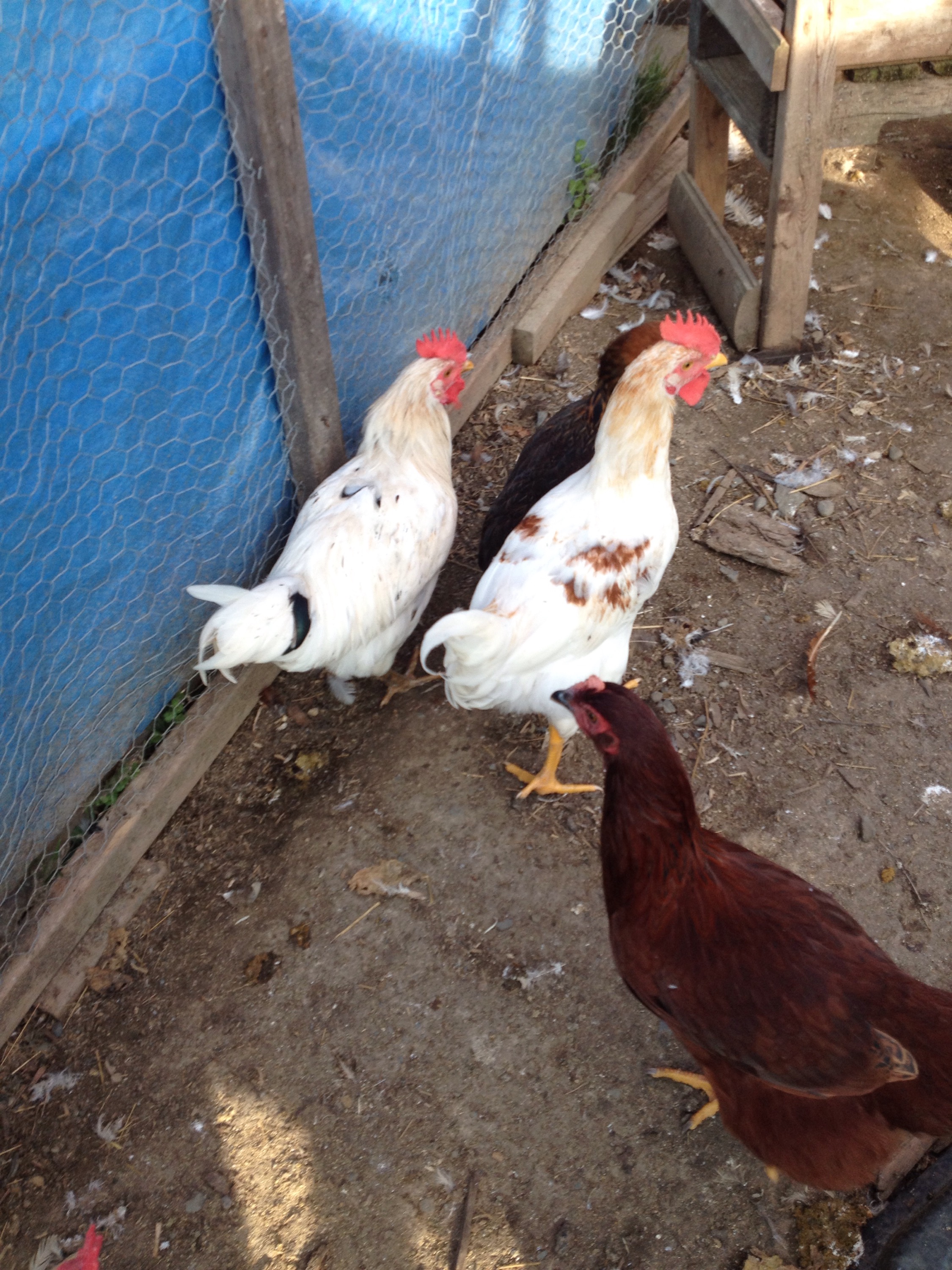 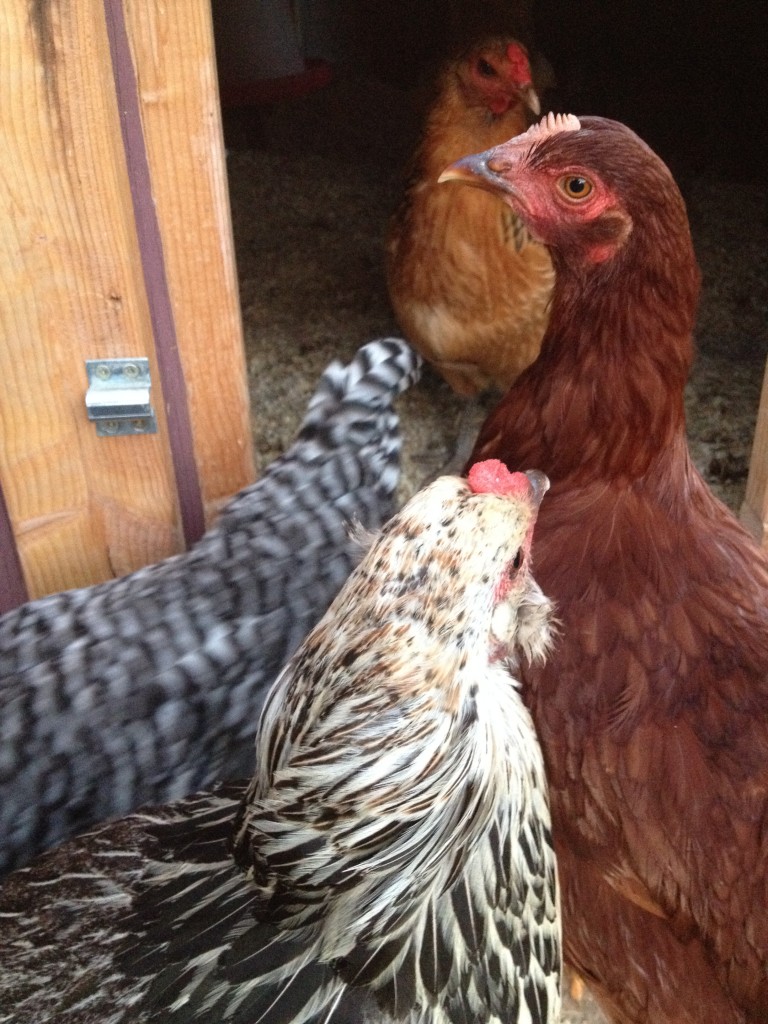 We started off with two comets – Edith and Louise – about three years ago now. We bought them for $50 in a chicken tractor. It was a 4-H project that a little girl on a goat farm had done. We brought them home in a cat carrier and they were really unhappy to woke up when we got them home at about 10pm.

A month later we got a third hen, a little three month old Araucana who had been beat up by her current flock. We bought the three of them a cute little coop that had been made out of a dog house and let them free range.

Thus started the cascade. One year later we bought 8 Easter Egger chicks from the local hardware store. One turned out to be a rooster. Two never showed up one night for bed time. By winter we had a flock of nine hens and one roo. We renovated our old shed to a mini-barn and bought a new shed for everything else.

This spring brought trouble: we had a fox attack that took off one of our sweeter birds and injured another. A month later another attack took Louise, one of our pet birds that was going to live her life out here.(The bird that survived a racoon chasing her, a dog attack, and various battles with her sibling, Edith) In that second attack the roo was a bit ruffled up and fled, and Skee (our little rescue bird). The third attack was a coyote. It napped Skee and then kept trying to come back. I had to work outside for close to two hours before it wandered off.

In amongst all that we had to have our rooster dispatched. He became overly aggressive and was attacking us. I had to carry a stick around the yard with me. If it was just my husband and I, that would be one thing, but we have a young child. The roo had to go.

This summer we raised meat bird for the first time – all heritage breeds – and added four ladies back into our flock of layers. The three Rhode Island Reds and one Barred Rock have melded in nicely.

Right now we have 22 birds on the premise: 9 layers, 12 meat roos, and one roo that we’ll be keeping. In order to make a smoother transition for Jovi we’re trying to find a young hen to match him up with.

Welcome to the beginnings of a mini-barn!

Thanks to a fox taking off two of our hens and then the would-be-butcher never getting back to us, we ended up keeping the six last chickens from what was to be a broiler flock. We now have eight hens and a very loving rooster. Needless to say, that left us needing to either add on to the old coop or gain a new one. We decided to go with a “new” one, or more specifically, to revamp the old wooden shed and build a new metal shed. We were able to scrounge a lot of the wood needed to alter the old shed. Only four 2X4s were purchased, and technically only two full ones were used. 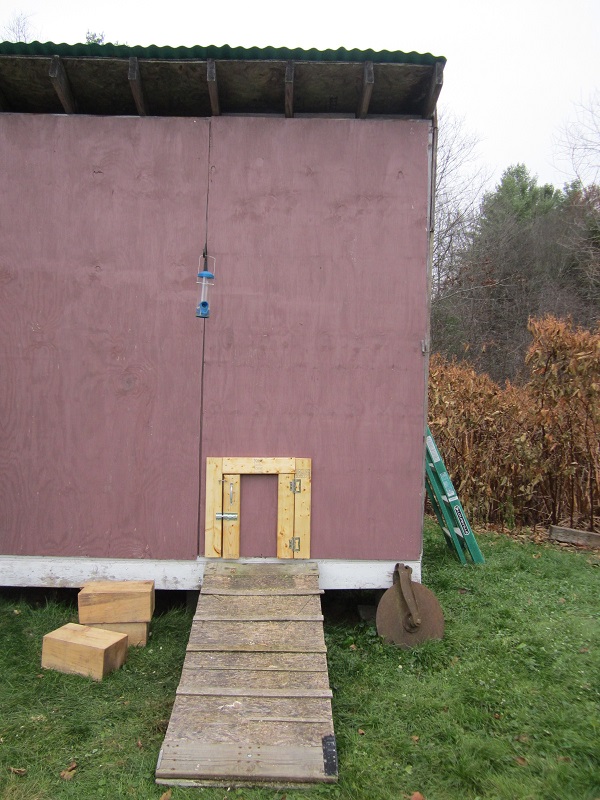 Front of the shed showing the new chicken door. 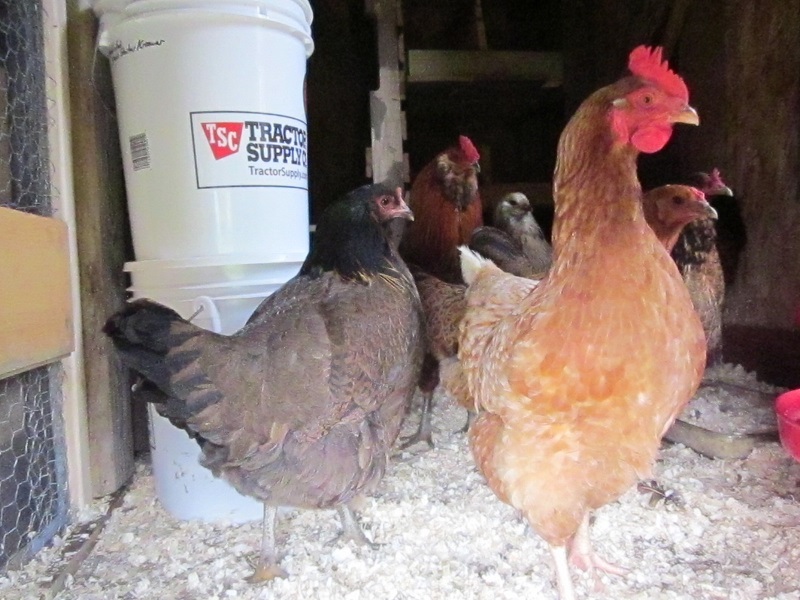 The girls don’t seem to mind their new home. The surprising thing: NO fights! 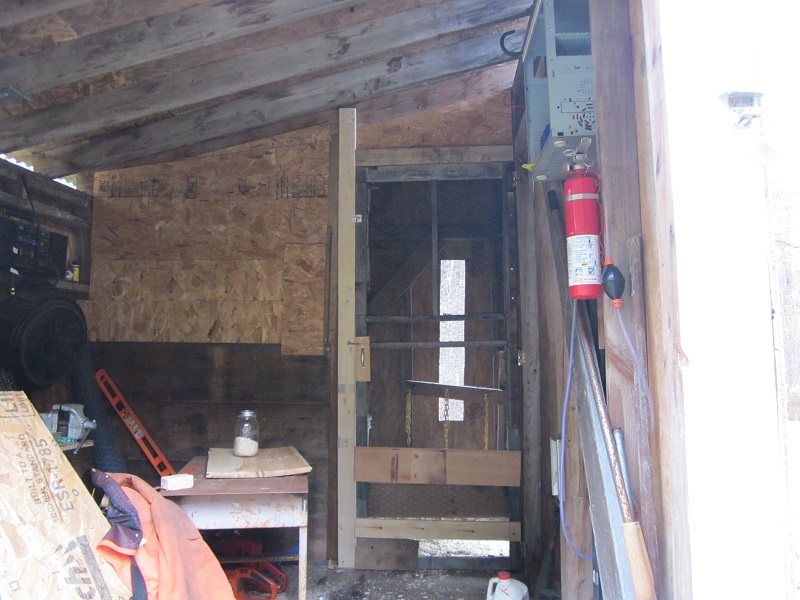 Interior of the shed/mini-barn. The bottom half of the wall is a pallet that we had lying around, the chip board was extra from building the floor to the new shed, and the screen door was the old one from off the back of the house. The only “new” pieces here are the 2×4 bracing for the door and some of the hardware. 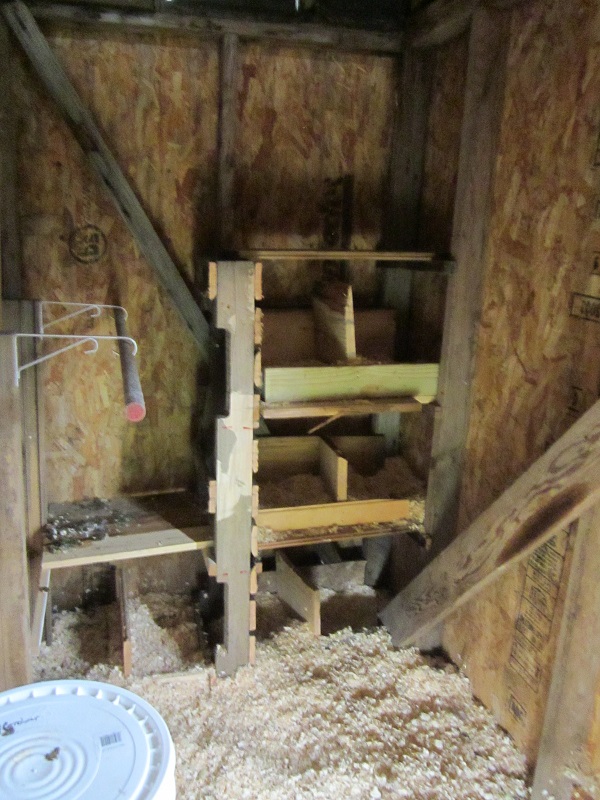 Inside shot of the nesting area. There are eight small nesting boxes made of four larger ones. The dividers are removable for easier cleaning. The roosting bar is from the chicken tractor and the plant hangers are extras we had from another project. 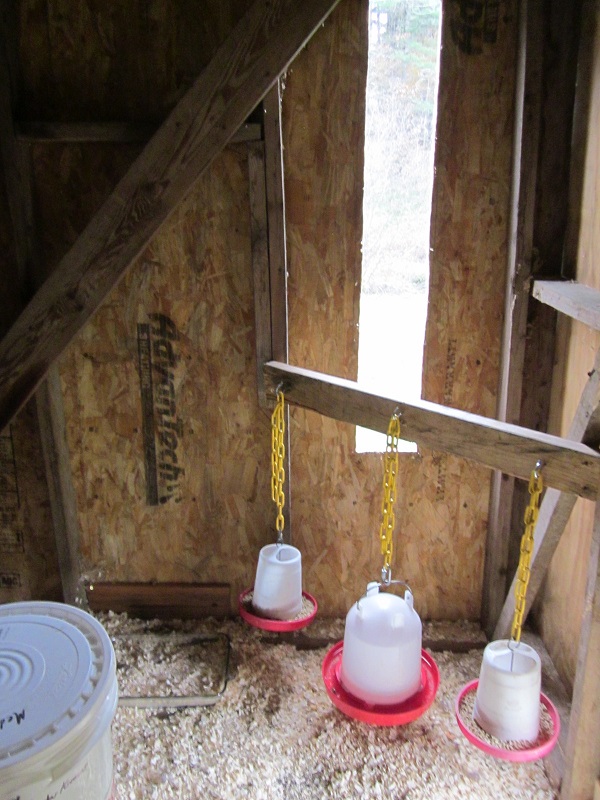 Water and feed area. I’ll have to do something different with this as they keep using the bar as a roost. For now I’ve been moving the containers at night.

We ended up having to close everyone in the new coop for a full day before they would go in on their own at night. (They had been circling the old coop and tractor like vultures. It made for a hassle carrying them to the new coop every night.) We haven’t lost any egg production with the change and, even better, we haven’t had to deal with frozen water at all as their new set up stays warmer at night.