We’re down to eight. 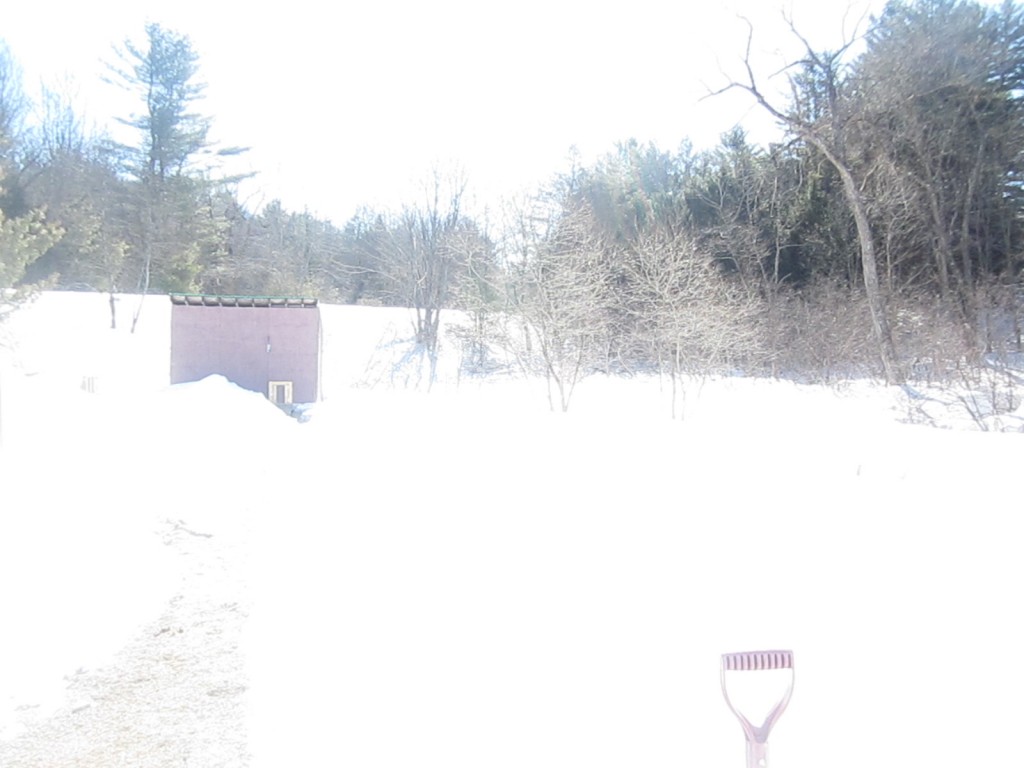 This is a photo from the back stairs this morning around 10ish. That blinding light is what I had to fight through to see an unknown critter run off with one our layers. You’ll notice that the coop is closed now. The remaining seven layers and their man are tucked in for the day. They were all dazed enough to let me put them back in.

I wish I could say I knew exactly what took them. I’m not sure. Any time an animal has come on to the property after the chickens the ladies have sounded the alarm when the critter is on the boundaries. Not today. Apparently, when they sounded the alarm whatever it was had sneaked from around the bulkhead (to the right side of this photo) and almost grabbed Beardie (so nicknamed because of her lovely beard). Apparently I scared it when I tried to open the door. Unfortunately I also scared Minski off the stair as well. She took to the air and before I knew what was happening, had been caught and carried down past the coop, out beyond the two smaller willows. I still couldn’t tell what had her. All I could do was watch until it snapped her neck and went off through the woods. I had to watch. I had to make sure whatever it was had been the only attacker.

The “chicks” as we still lovingly call them, had no idea what to do. The rooster was out front with the older girls, from the best I can tell. Our older ladies – who are definitely pets for us – have survived a raccoon chasing them, a dog attacking them in the back yard, and a fox charging over the tracks at them. They knew what to do. I hope these young girls catch on. They stood there and watched with me. They’ll miss Minski…we all will, but there’s a lesson for all of us in this.

Our little flock of layers are staying warm in the coop for today. I gave them all a thorough look over. Beadie’s missing a patch of feathers the size of the bottom of a coffee cup, but is already back to pecking me when I try to grab the eggs, so I think she’ll be fine.

In the three years that we’ve had chickens, this is the third bird we lost. The other two were last fall, and we’re not entirely sure what happened.

While it’s sad to see this happen, and I’m still trying to process it, I know that the first thing that came to mind was this: I cannot stop free ranging our flock. Even if we lost each and everyone this year to an attack, I feel allowing them to explore and get the best out of their lives is by far better than them living in a coop for their entire lives. (As far as runs go, I tend to think they’re more dangerous as the chickens have no where to go if a predator gets in. At least in this case – and in previous cases – they were able to run.)

Now it’s time to think and see if there is anything that we can do to help protect our flock better. A couple options….

1. A dog that barks. (Diamond, who hasn’t even been with us a year, slept through the whole thing. Even though she’s a rescue and we don’t know her past, I’d bet dollars to doughnuts she’s a city dog who’s used to noise and that’s why it didn’t phase her.)

2. A gander. (We can’t trust Diamond out by herself with the chickens even if she did bark. She likes to play with anything that moves and we’re working really hard with her not “death shake” toys.)

Any other ideas, PLEASE add in the comments!