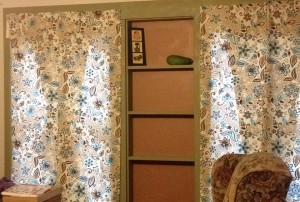 Projects and plans don’t always pan out the way you hope. As self-sufficient as we would like to be as a family, sometimes there are some things we just don’t even dare to tackle due to lack of knowledge and/or lack of time.

When we first bought a house here all gung-ho about doing everything and anything ourselves, but thankfully we’ve learned that that’s just not always possible. Sometimes you have to hire somebody to do the work for you. For a lot of the projects that we’ve had to do that for there’s a local person that we are rely on.

Matt and his new coworker, Bob, came over in the beginning of October to help add new windows in to our living room. The old ones were pretty shoddy, didn’t have screens, and most importantly leaked, rotting out the wood and calling carpenter ants into the fray. We’ve been dealing with those old windows for five years – trying to find different ways to remedy the situation, making the best as we went along. Well, whether we stay at the house long-term or move out short-term, it became very evident this summer with the increased leaking that the old windows needed to go.

Discussing our options over the pass course of the year so we decided to go to single windows the same size as the third living room window. This change not only would help the house be more accurate to the time it was built, but it would give a little bit more usability to the living room given its small size. At first we were a little apprehensive about losing our large picture window because…well, who doesn’t like a large beautiful picture window? But sometimes it just doesn’t fit style of the house, the style of your life, or the style of your wallet.

When all was said and done, the fiscal damaged totaled nearly $1500. It is a steep price for our modest income, but well worth it. Especially well worth it when you think of the headaches and hassle that we avoided and the time off that we didn’t have to take from everything else in order to install the windows through trial and error. Not to mention that these windows have a high efficiency rating and are just a beauty to look at.

This entry was posted in House and tagged energy savings, up-grades, windows. Bookmark the permalink.